Eilat, Israel’s southern-most city, is a seriously strange place in every respect. It resembles a Las Vegas, with less debauchery and wild things to do, but has the added benefit of being the Northern gateway to the Red Sea. It is surreally positioned just a few miles away from the Jordan border on one side and Egypt’s Sinai Penninsula on the other. If you somehow find yourself in Eilat (as I did when I discovered cheap Ryanair flights from Berlin), here are recommended things to do and not to do so that you don’t leave with a negative impression and rather, a shit-ton of good memories. 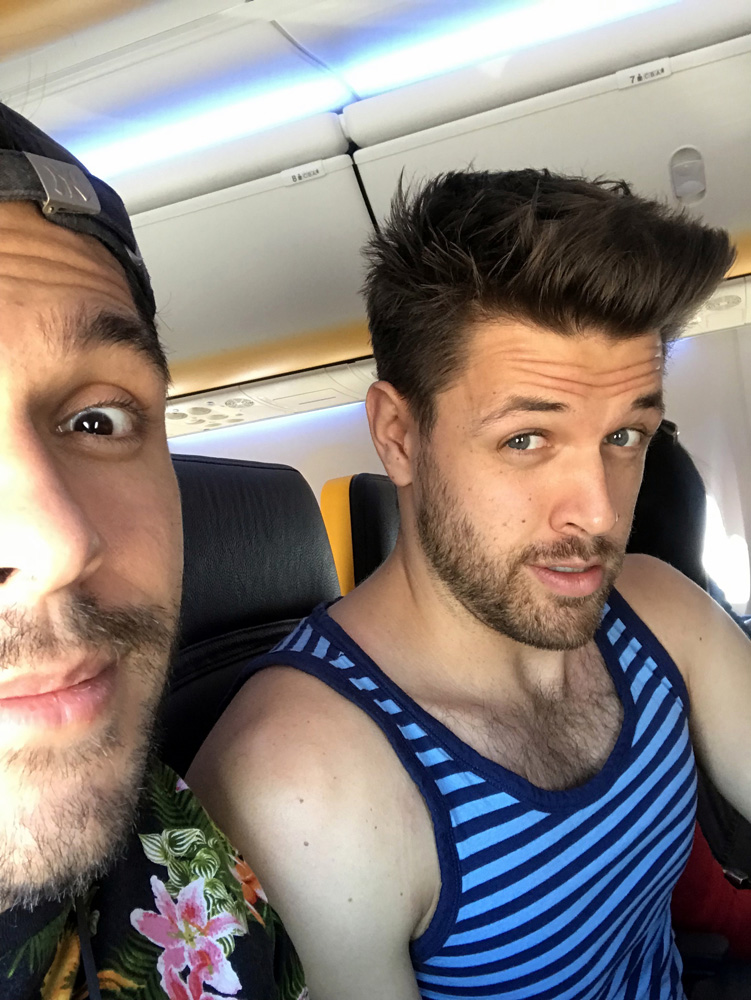 Ryan on Ryanair - The Irony 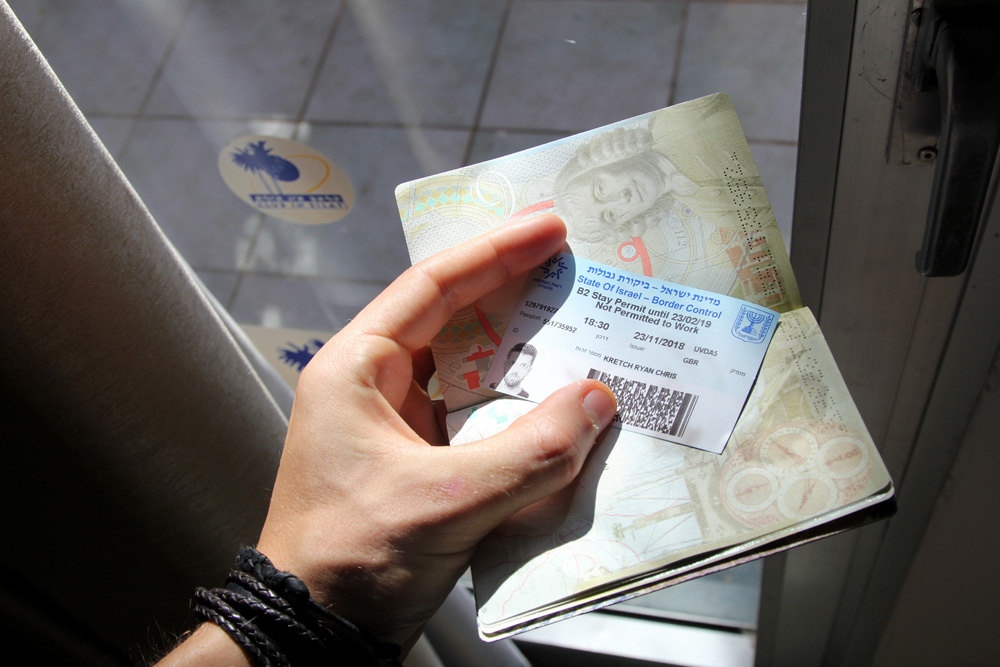 No stamps! I can still go to Iran

Spend too much time at the Promenade

Super commercial with aging hotels, McDonalds, and highly-priced stores, the promenade was my least favorite part of Eilat. This part is the most resemblant of Las Vegas’ consumerism hell. However, there is some nice beachfront spots in this area with super calm and serene waters looking south towards Jordan on one side and Egypt on the other, but please for the love of g-d, don’t spend too much time here.

Once you get out of the main part of Eilat, the stretch that heads down to Egypt’s border is pretty extravagant. On one side you have mounds and mounds of copper-colored rock and on the other side, the Red Sea that fades into the Mars-like landscapes of Jordan. As you keep going South, it gets quieter and quieter with just a few hotels here and there. It is a good place to clear the mind and bask in the serenity of the desert and sea around you. A good beach on that stretch is Mosh Beach, which wasn’t too crowded when I was there.

Some seriously “Finding Nemo”-like fish were swimming around in these areas, so grab some goggles, some snorkeling equipment, or even some scuba gear and check out the waters. 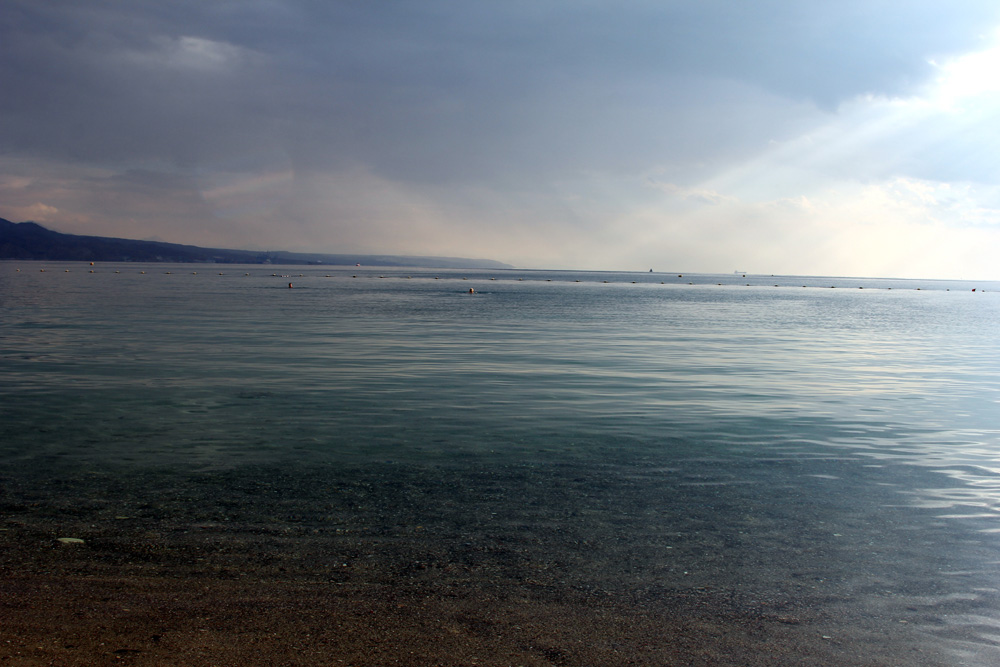 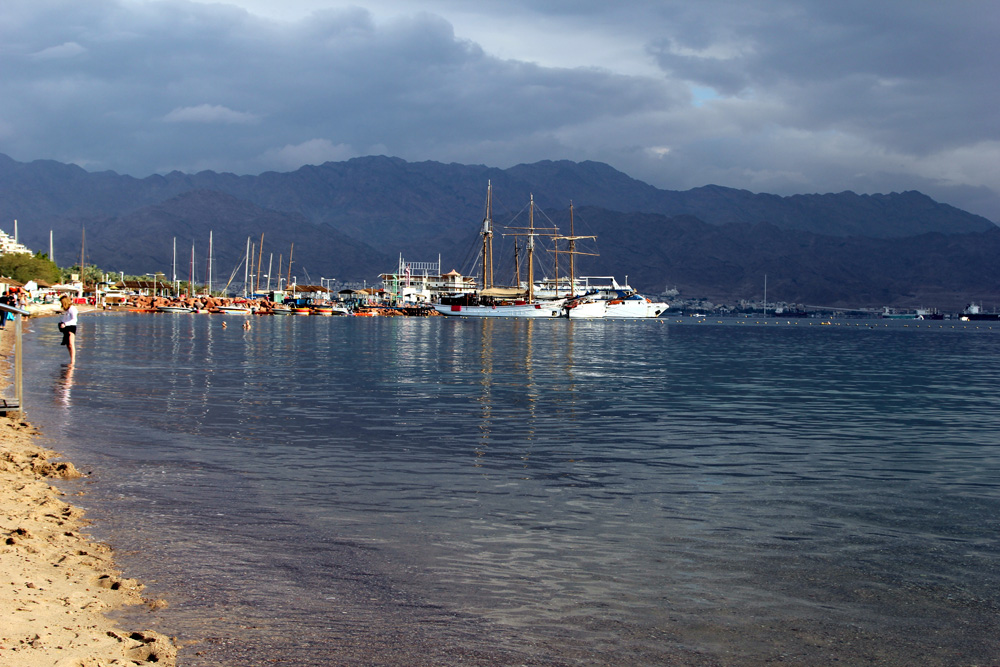 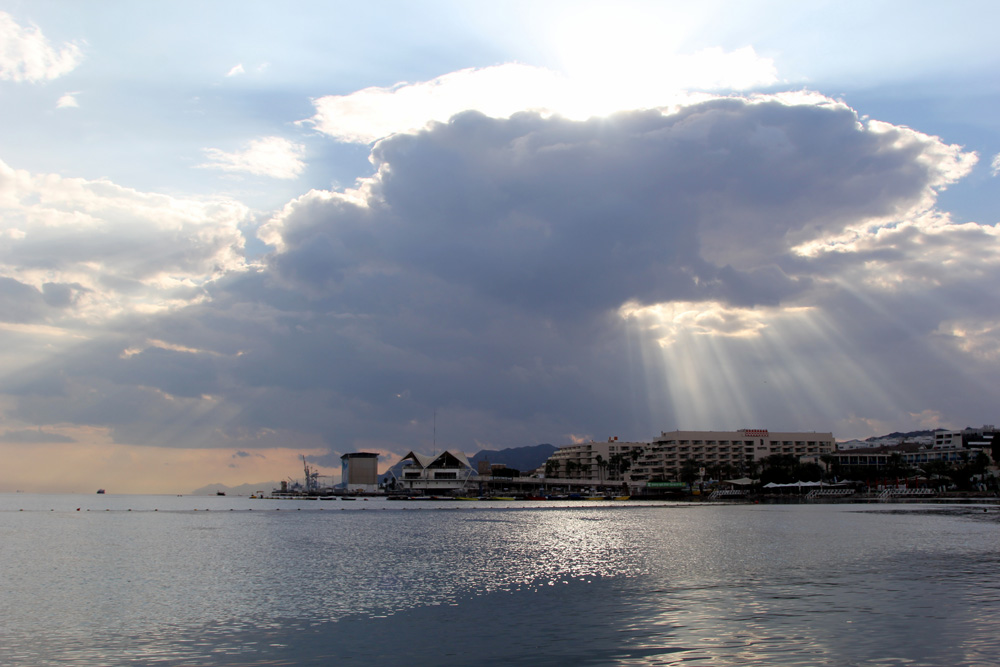 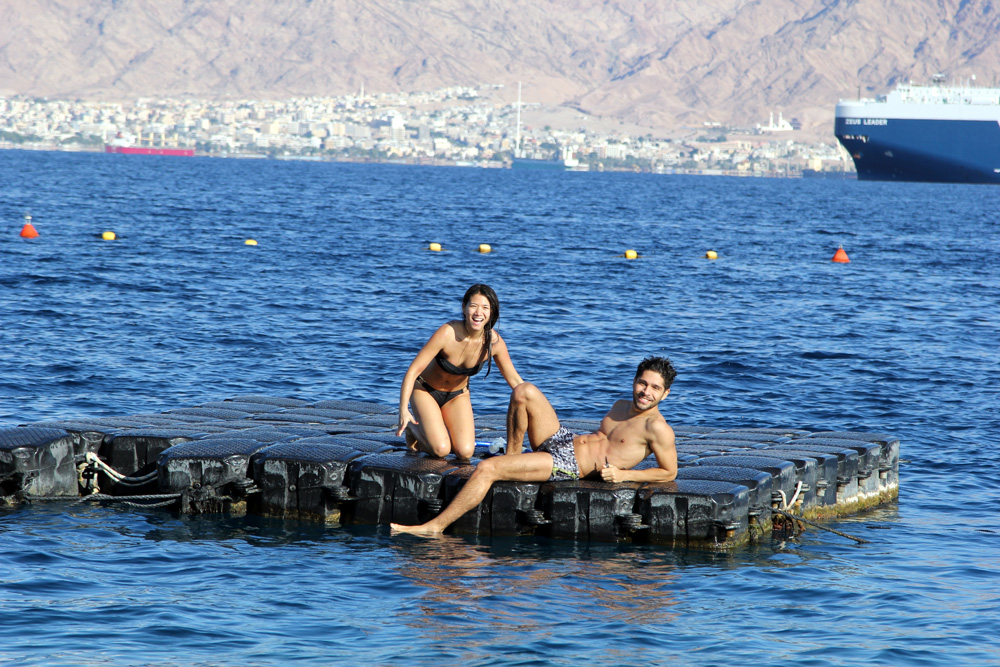 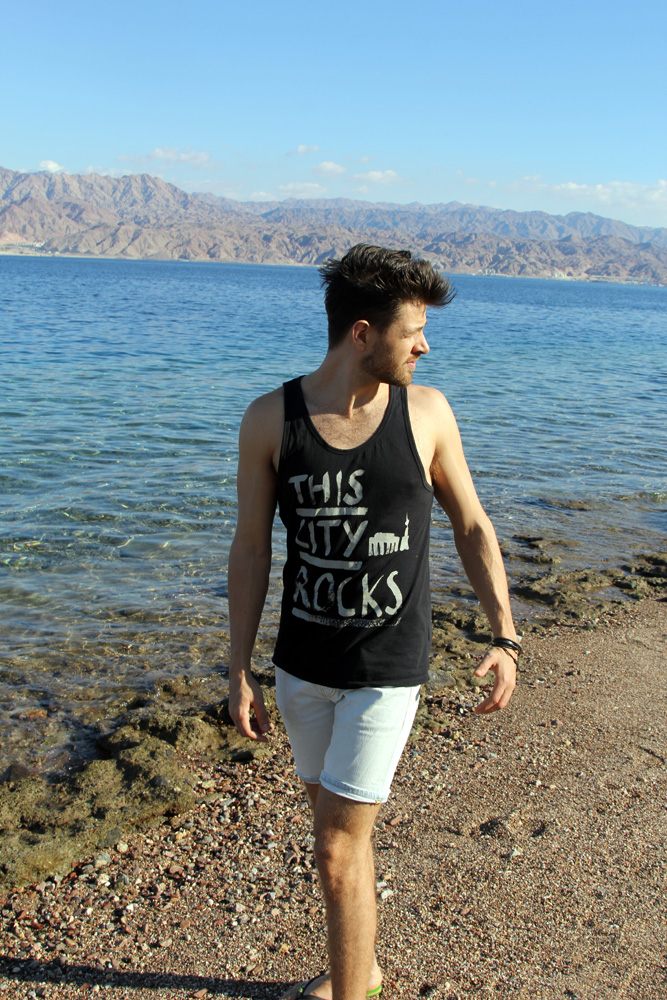 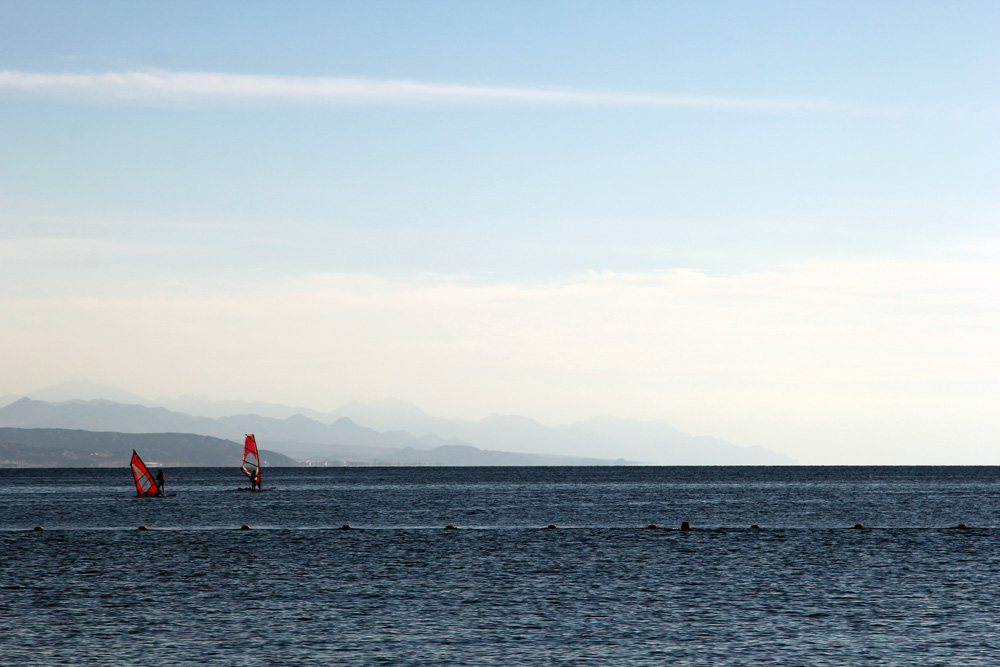 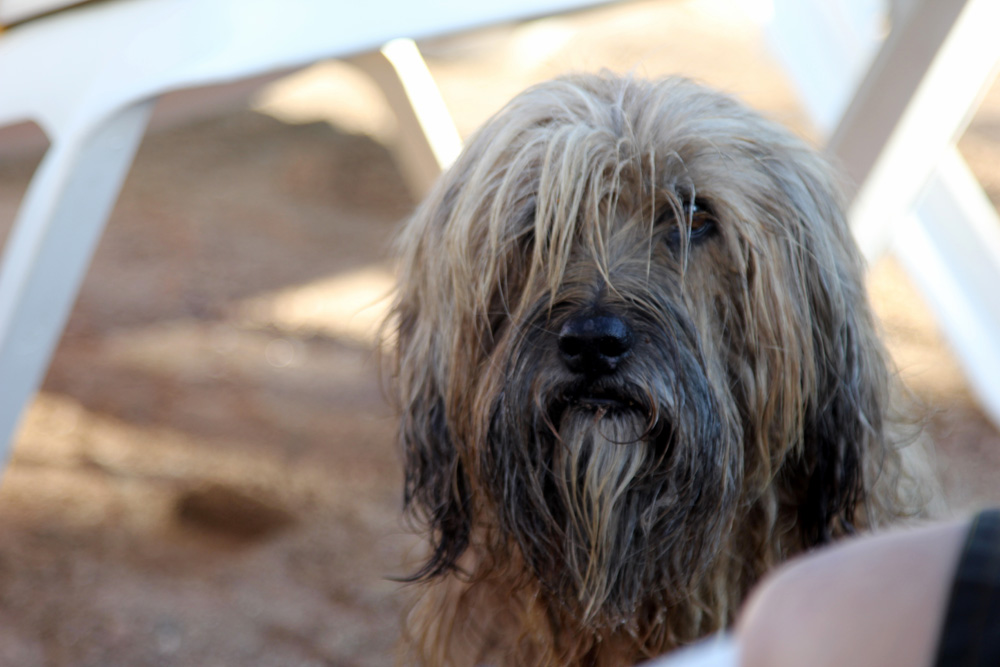 A few kilometers north of the Egypt border is this funny little outdoor restaurant with lounge chairs, far too many pictures of the owner (who will most certainly be there as well dressed in a traditional thawb), and the smell of sheesha emanating all around. Their hummus, shashuka, and homemade pita is orgasmic and the sweet tea is addictive. Unlike other restaurants in the city, this place won’t set you back a huge amount. I left outrageously full having only paid about 15 Euros for food. Yusuf will likely come sit with you at some point, so don’t be alarmed and just fall in love with the guy and his place. 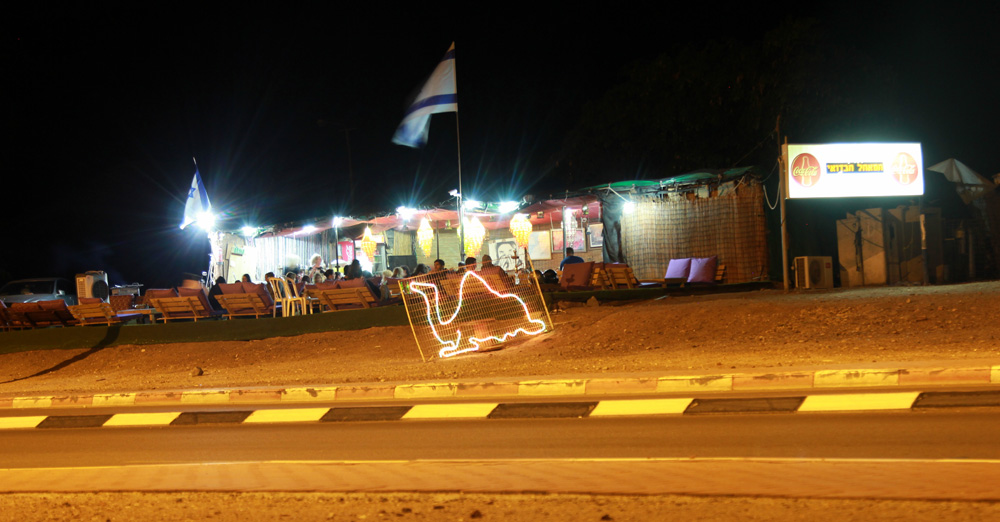 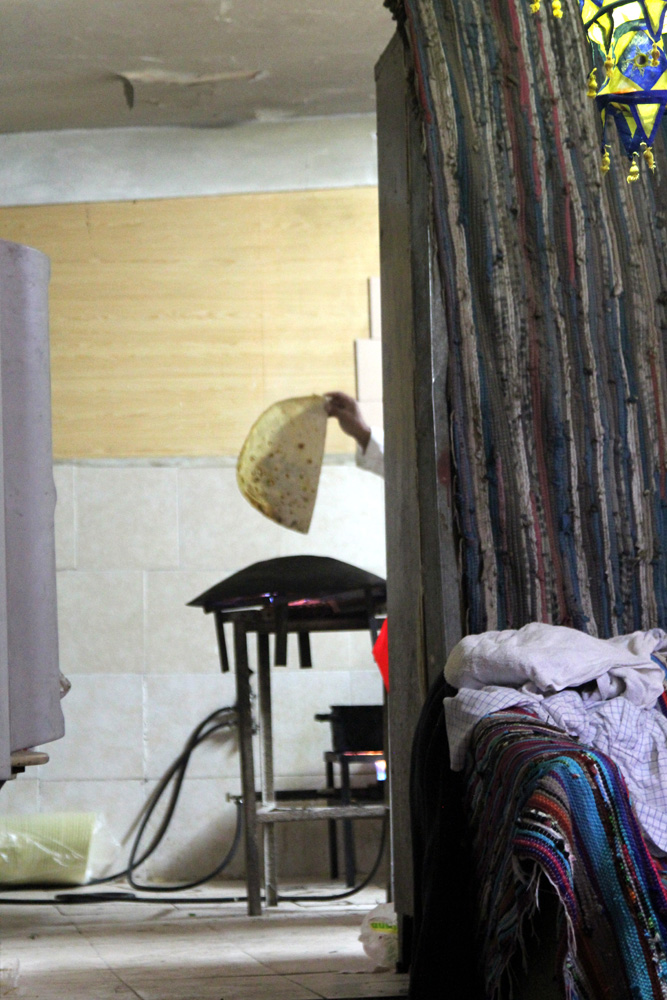 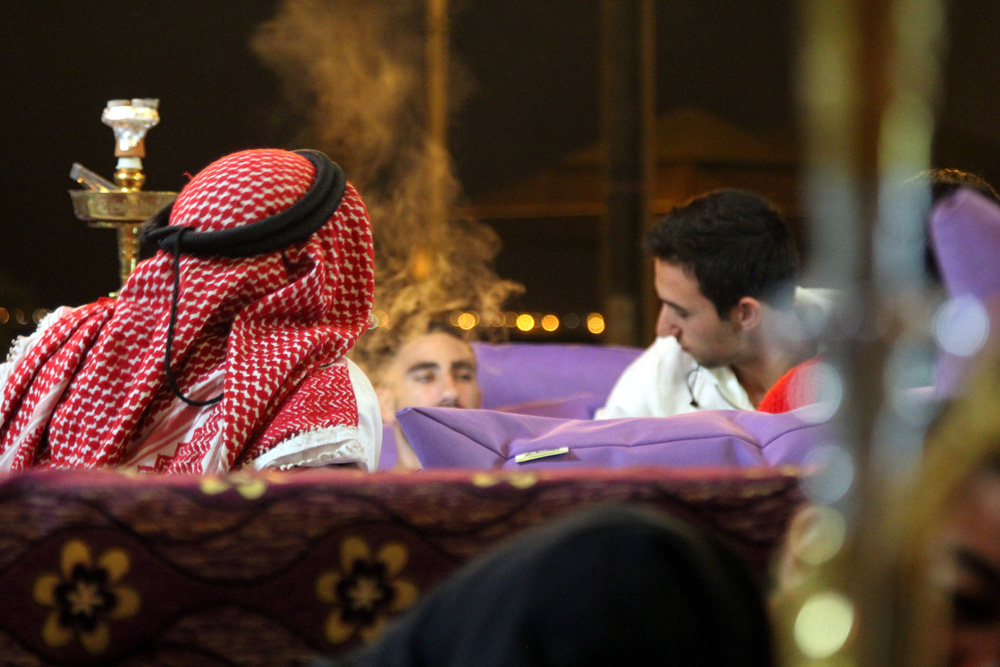 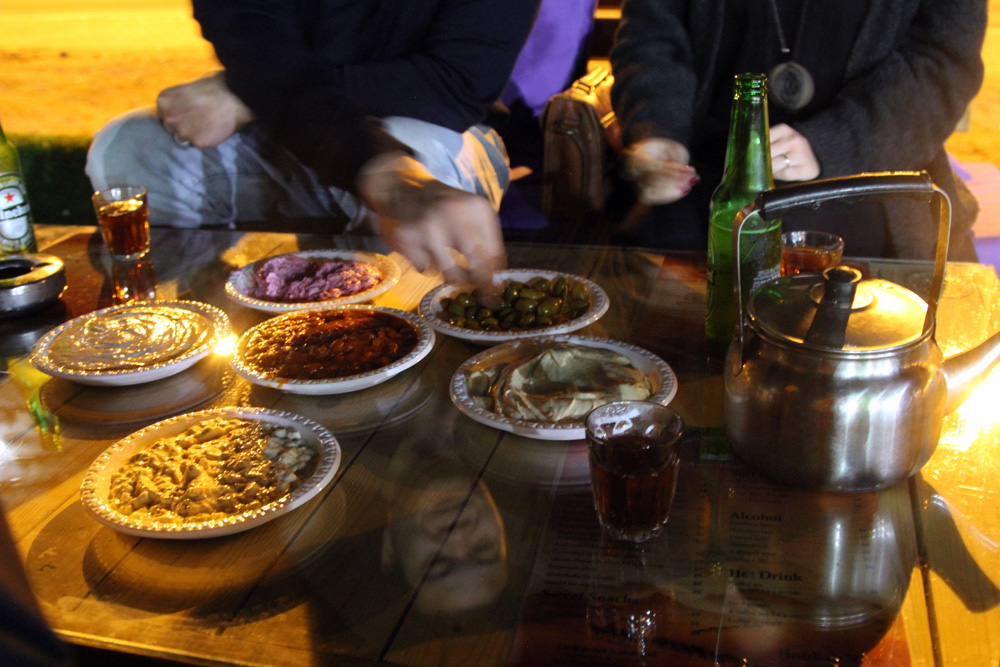 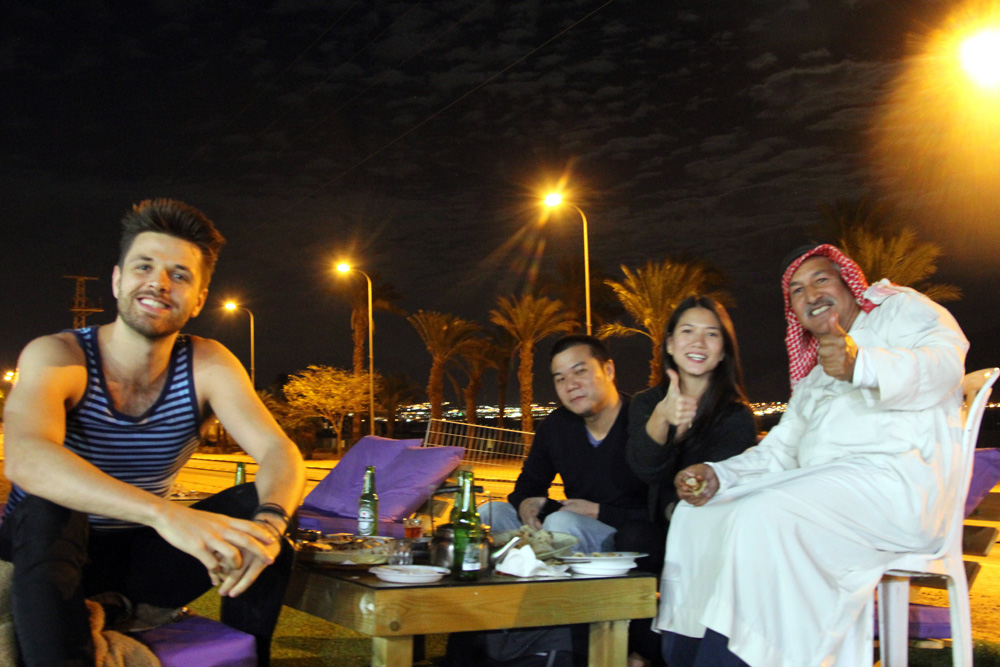 Be dissuaded by the general lack of politeness in Eilat

Hotel managers, shop-keepers, waiters, security guards…we seemed to have a run-in with everyone we came in contact with, and grimaced at the lack of hospitality or genuine courtesy demonstrated by people. But you will find some nice ones, with good advice, and a friendly smile too. Don’t let a few incidents ruin your impression of the place.

Just on the other side of the promenade lies the start of Aqaba, Jordan. You can go for just a few hours and check out the sharp contrast between the two cities and grab some delicious food. It is safe, but one thing to look out for is getting your passport stamped on the Jordan side. Because the border crossing is from Israel, you may jeopardize your chance of visiting countries that do not see Israel in such a good light (i.e. Lebanon, Iran, etc.) But if you ask, they should be able to stamp a paper instead.

For more tips on how to arrange this, check out this article 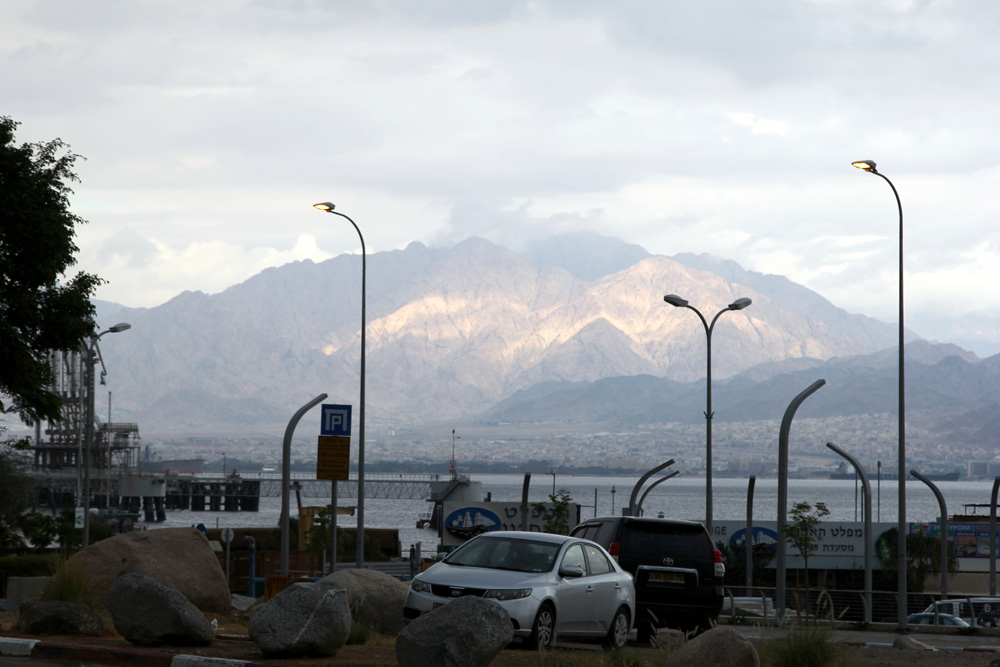 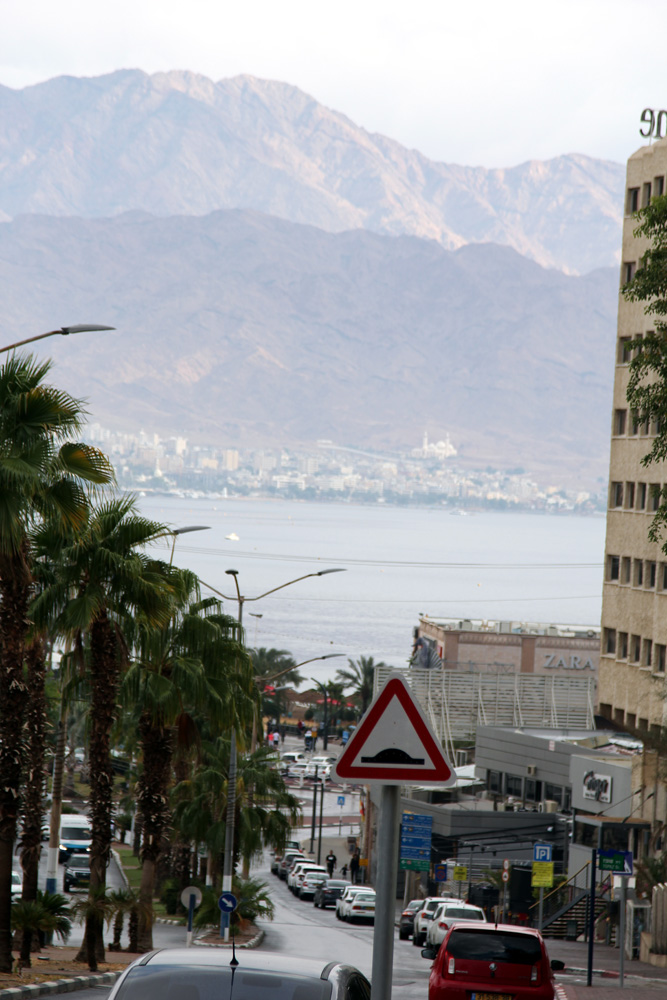 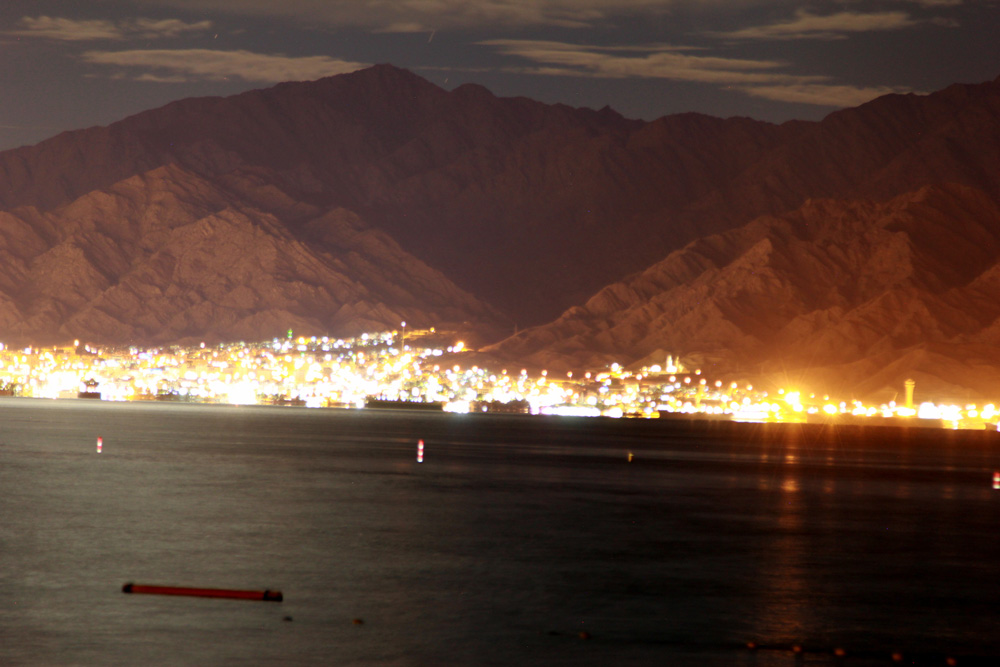 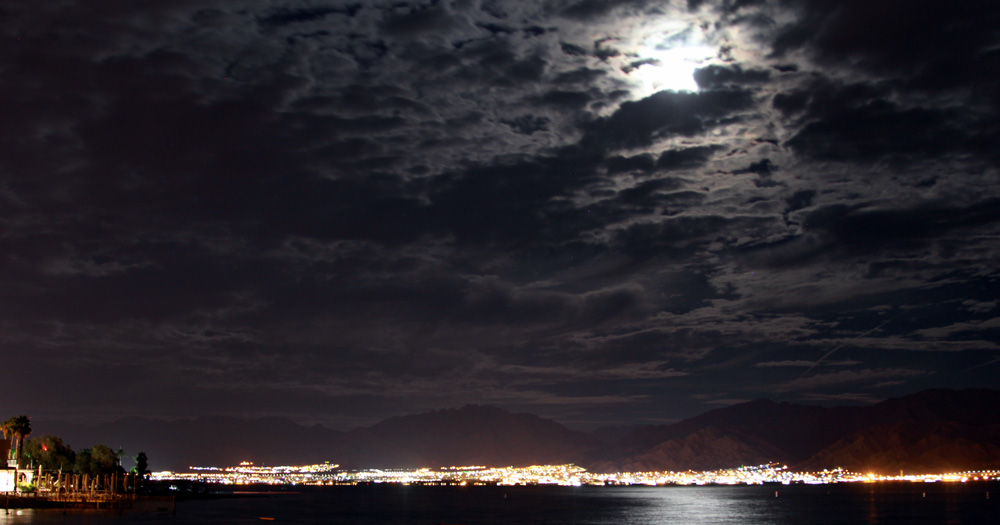 The landscapes around Eilat are freaking out-of-this-world. I kept thinking that we were on an Earthly version of Mars. For this reason, staying in the Eilat city the whole time would be depressing. Get out and see the Red Canyon or just put on your walking shoes and climb the rusty red hills in any direction.

Buy some hummus and pita and go to town

All the 24-hour supermarkets have big tubs of hummus for just over 2 euros (in many different varieties). Everyday I was there, this would be my money-saving trick and it was delicious. 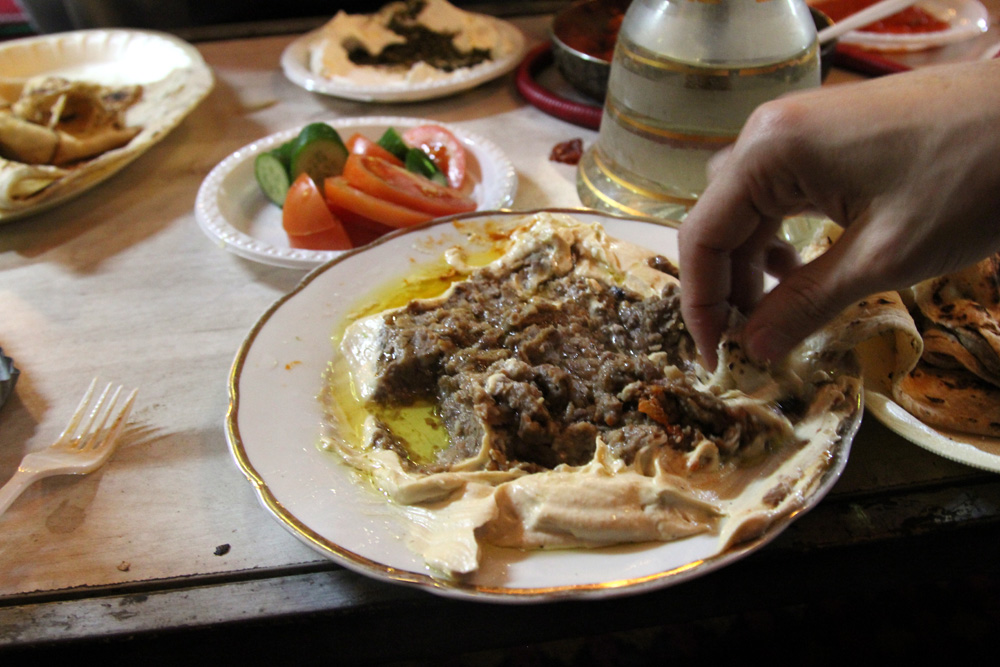 Getting from Ovda International to Eilat: As soon as we landed, and went through terrifying customs (where I eventually was showing the woman an income statement to prove that I worked in Germany), we got out of the shack of an airport and had no idea what to do. With no clear signs, it is best to take the dark green shuttle buses which will take you the 45 minute duration to the city center. You can buy the tickets on the bus and they should run you 21.5 Sheckels per ticket.

Weekends are different from what we are used to. Weekends run on Friday and Saturday in Israel, so expect things to be closed, especially on Friday night and Saturday during the day.

Alcohol: Sales stop after 11pm from supermarkets, so stock up people.

While Eilat wasn’t my favorite destination, it has some surprisingly incredible things to offer. The location and scenery is from another planet, but avoid the commercialism to really get the most out of the place.

Wandering around the Old Town of Prague, you will be wooed with signs bearing the words “absinthe” or “traditional…

I can’t remember how I became friends with Sara on Wechat, but she was one of those people consistently…